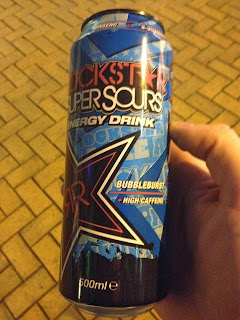 My last experience with Rockstar was not exactly a nice one, but I'm one to keep an open mind, and this can caught my eye. The Supersours label in particular piqued my interest, as sour stuff is right up my street. Despite the flavour being "Bubbleburst", which is cryptic at best, I somehow guessed correctly that it was bubblegum flavoured. Maybe it was the blue packaging leading me gently to the conclusion.

So, a sour, bubblegum flavoured energy drink? Doesn't sound too nice on paper (or aluminium). The truth is, it isn't too nice, but it certainly isn't awful. The bubblegum flavour is pretty spot on, in the way that it tastes like all the other "bubblegum" flavoured sweeties around nowadays. Unfortunately, it wasn't sour at all, so that part left a lot to be desired. But hey, it tastes alright. It's still quite syrupy and sickly, but not as much as the last one I tried. Perhaps the overly artificial flavour takes the edge off the consistency for a bit. Either way, I managed to polish off the whole can, but I probably wouldn't buy it again. The flavour, while pretty spot on, doesn't really work well with an energy drink, and it's just a bit too sickly for my tastes.