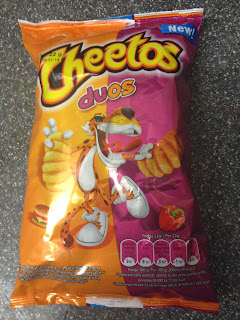 Ah, Cheetos. You come in many weird and wonderful forms, but are seldom seen in this country. I'm always excited to find a new kind of Cheetos, though I think nothing will beat the crunchy varieties. Here's a packet I found the other day, of Cheetos Duos. I'm not exactly sure what's going on with these, because the packaging is all Polish, but from the pictures on the front I assumed that this one packet contained two different flavours, pepper and cheeseburger. That's an... interesting combination. 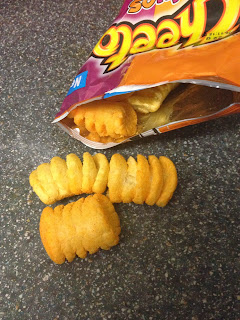 Can you tell which crisp is which flavour? No? Neither could I. Every one looks exactly the same, and the shape is just weird. They're bulky, with weird ruffles, unlike any crisps I've ever seen. Why they couldn't stick with the regular long shapes, I don't know, but these chunky ruffled crisps are just a bit too heavy, and quickly turned to mush and got all stuck in my teeth. Not overly pleasant, but the flavours helped a bit in that regard.

Well, it helped with half the pack. You see, of the two flavours, only one is good, but I don't know which it is, because there's no real way to tell. One flavour is pretty bland, while the other has a fantastic strong, saucy taste. I'll assume the latter is the cheeseburger flavour, as it tastes a bit like burger sauce. But whatever it is, the bold flavour does well to overcome the issues suffered from the weird, bulky shape. The other flavour, however, does not, and eating those ones is not an overly nice experience. So I'm torn. These Cheetos are half good, but the other half both baffles me and does little for my tastebuds. A decidedly average Cheetos experience.