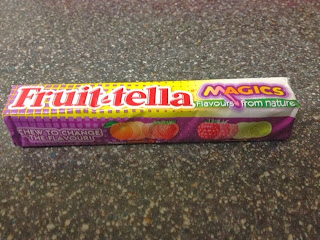 Oooh, magic Fruittella. What illusions can they conjure, what daring feats can they perform? Well, they're flavour changing sweets. Not exactly a new idea, I've already tried Starburst's version of these, but I was willing to give these a try to see if they're any better (it wouldn't be hard). 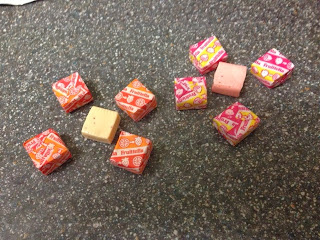 Two flavours? That's not a great start. The Starburst Morphs have three. But still, these do seem to be quite interesting flavours, with no repeats either. We have orange which changes to strawberry (which is good, I prefer strawberry), and raspberry which changes to lime. Also, from what I've seen so far, you get five of each in every packet. That's a nice touch.

Now, I don't eat Fruitella a lot, but I'm not sure why, because they generally taste awesome. They're generally a lot smoother than Starburst, and these Magics are no exception. They flavours are bold, and the sweets are easy to chew, with none of the weird residue that is left behind when you eat the Morphs. As for the flavours, they're all good and distinct. You can really taste them changing, and it's hard for me to decide which flavour is my favourite. It turns out that flavour changing sweets can be done right, so keep an eye out for Fruittella Magics, they're delicious.