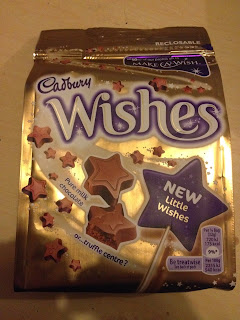 I reviewed Cadbury Wishes at the beginning of this year, and was quite surprised as how tasty they were despite initially looking a bit boring. Well, this year Cadbury have brought out a bag full of miniature versions of their wishes, and once again I have held off on buying them as I didn't think they'd be anything special. But, since they were on offer, I took the plunge.

This bag contains star shaped chocolates that come in two forms. One is plain Dairy Milk, and the other has a truffle centre, much like the larger version. I was under the impression that it was a lucky dip situation, but then it was pointed out to me that each kind has a different pattern on top, so my illusion was shattered. Still, I'm not too fussed with the patterns on chocolate, just how it tastes, and these taste good. The diminished size makes the truffle not quite as delicious as the bigger version, there's just not enough filling to give that magnificently creamy taste. As for the milk chocolate stars, they're Dairy Milk, so obviously they taste great, but it makes me wish that all the stars were truffles. Still, it's a bag full of Dairy Milk goodness, so I can't complain too much. Not as good as some of the other Cadbury offerings lately, but definitely a tasty treat that's worth picking up.