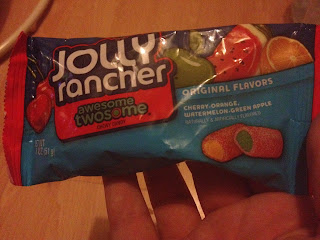 I love the original Jolly Rancher hard candies. They have great bold flavours that, while clearly fake, certainly pack a punch. I've seen the gummy version of Jolly Rancher a few times now, but have never taken the plunge. But a few days ago I spotted these little morsels for an alright price, so I gave them a go. 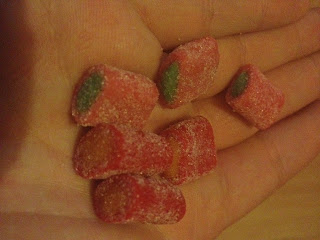 These sweeties come in two flavours. You have the cherry and orange, or the watermelon and green apple. Both the "red" fruits are wrapped around the outside, so the only way to tell the difference is by the colour of the filling. There's no real difference in consistency between the two flavours, although the middle part is slightly more chewy than the outer. Unfortunately, the consistency is a bit off for me. It felt like I was eating bubblegum, which confuses my brain and makes it harder to swallow. As for the flavours, they're certainly quite bold, but for some reason not as nice as the hard candies. Perhaps it's the odd texture of the sweet, or the combination of flavours at once, but while they're certainlty edible, they didn't make me think "Mmm, good old Jolly Rancher". There's a liberal dusting of sugar on top too, but it really adds nothing to the flavour.

Overall I wasn't too impressed with these. They're fruity and flavoursome, but there's something about them that's just not right. I think I'll stick with the hard candies.