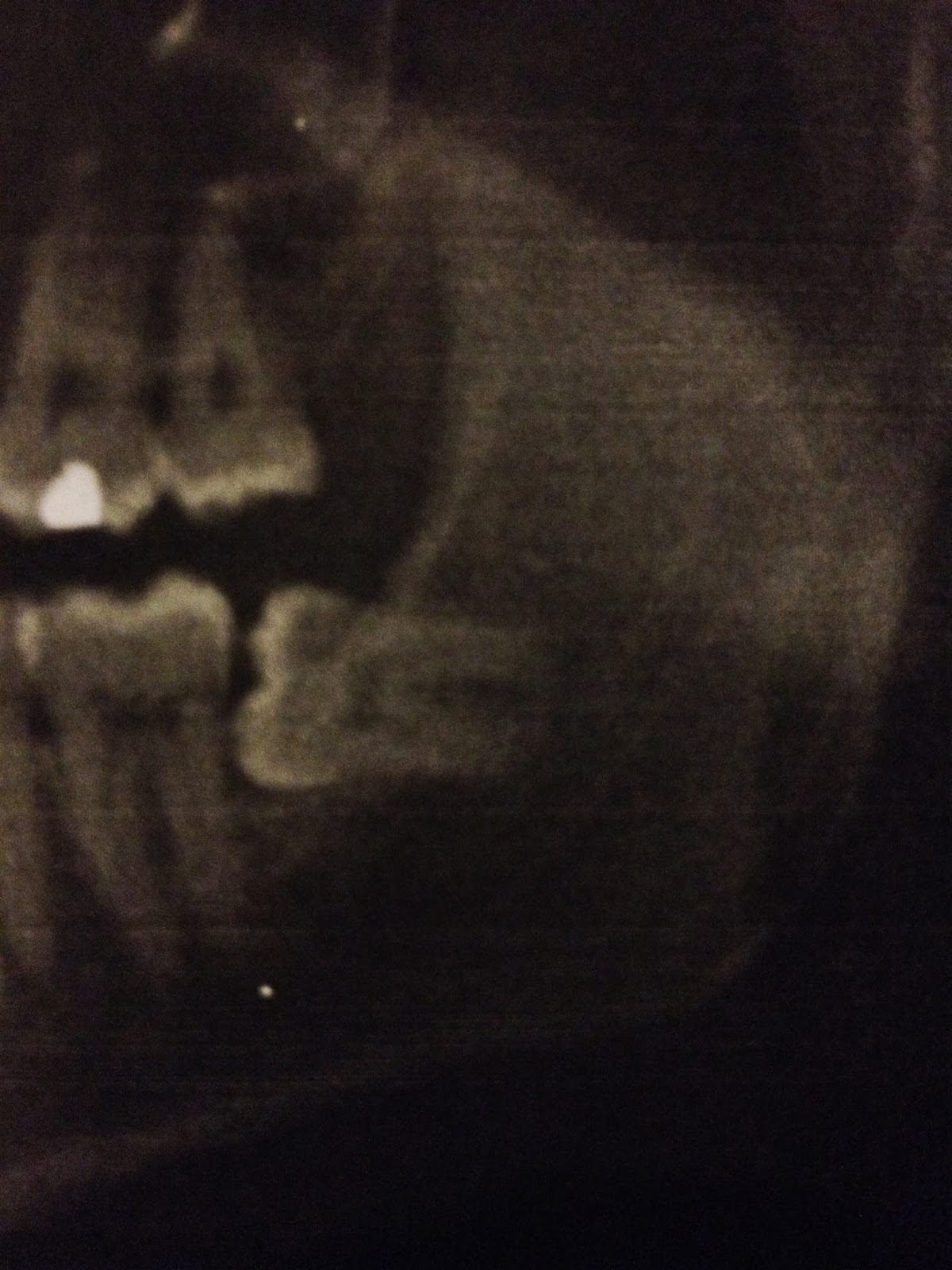 The thing about teeth is that they're meant to grow upwards, and not at all like that one is up there. Yes, that is my wisdom tooth, or rather it was, because it is no longer growing at a complete right angle on a collision course with my other teeth. Because my dentist agreed that teeth shouldn't in fact grow that way, and so today this tooth was extracted.

No one likes to go to the dentist to have work done. Fillings are a pain, root canals are worse, hell, even a check up can result in bleeding gums. But extraction is probably the worst case scenario to come out of a dentist visit. Having a tooth yanked out for good is kind of the final destination in terms of dentistry. I'd heard a few stories about wisdom teeth coming out, and I wasn't expecting to miss it much, especially at that lovely angle it managed to grow at. So I was all for having the thing yanked out.

You see, dentists generally know what they're doing, and mine happily stuck a needle into my gums a few times until the area was completely numb. Sure, the injections hurt, but they're better than someone reaching into your face and cutting out a tooth with no concern for your feelings. So with one side of my mouth devoid of feeling, my dentist went to work extracting the troublesome tooth, first scraping off a piece of bone, and then going at it with a variety of tools.

The word "extraction" implies some kind of tactical care, like a well organised plan by an army squadron or a secret mission for a spy. My wisdom tooth "extraction" seemed more akin to roadworks. A drill was used to slice the tooth in half, before he reached in with some form of pliers and went to town prying the pieces of my tooth out. All I could do was sit there in the chair, listening to a horrendous cracking as he pulled my tooth into pieces and out of my face. But since I couldn't feel a thing, all I could do was laugh at how awful it sounded compared to how little it was affecting me. Even afterwards, while he was stitching up the wound he cut into my gums, I couldn't help but tap my feet along with "The Power Of Love" by Huey Lewis & The News that was playing on the radio. It was, overall, a relatively quick and painless procedure.

However, the worst was obviously yet to come. I was still under the effects of anaesthesia after all, and since that's worn off I've been in rather a lot of pain. My jaw aches, the extraction area is sore and intermittently bleeding, and I have to juggle salt water, antibiotics and painkillers just to make sure it all heals up nicely. So while having a wisdom tooth out isn't bad at all while it's being done, I certainly wouldn't recommend you do it just for a giggle, as the after effects are pretty bad. Plus you'd have to fork out £50 for the privilege.