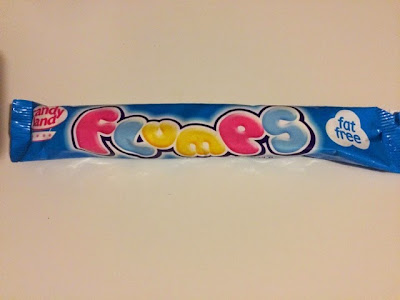 Once again I remain bored on a Friday night, with nothing new and exciting to stuff into my face, so I resorted to digging through the assorted box of snacks that the whole family have access to. Today I found a Flump. Can you call it a Flump? The packet says "Flumps", but there's only one piece in there. Is Flumps the singular? Nah, I don't buy that. If you're eating one, it must just be a Flump. 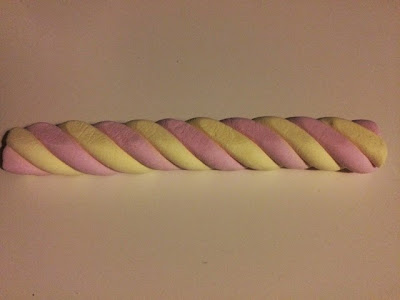 A Flump is a long twisty marshmallow. Not much more to it than that, apart from that it's vanilla flavoured. You might be lead into thinking strawberry or some other red/pink fruit were involved, but no, the colouring is just there to make it look pretty. Besides, vanilla is a good enough flavouring for a marshmallow, we don't need anything fancy here. Now, it may look like you can unravel this thing like a big fluffy Cheesestring, but you can't. I should know, I just opened another one and tried it, and then I had to eat it. The things I do for you guys. So the bad news is that it's all one, slightly sliced, entity. But the good news is that it doesn't matter. This thing tastes so good that you shouldn't waste time picking at it, you should just shove it in your face. Nibble it, devour it, wrap it around your gums like oddly shaped dentures, it doesn't matter. What you'll get is a wonderfully soft, very flavoursome marshmallow that is very moreish. This is another one of those bargain sweets that is a classic for very good reason. If you haven't eaten a Flump, you're probably committing treason or something, so just go and buy one. You won't be sorry.