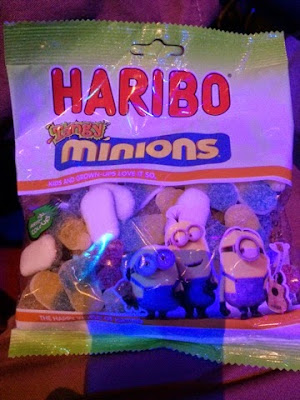 Well, that sure is a bad quality picture, sorry, I was in the theatre at the time. But hey, you get the idea. The original Haribo Minions surfaced at some point last year, at a bit of an odd time, seeing as it was a year after Despicable Me 2 came out. But now the Minions movie is just around the corner, so there's a new variety of Minions Haribo around, and this time they're tangy. 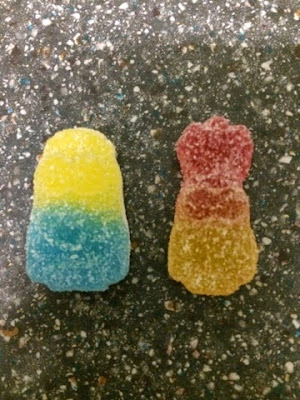 Well, these are certainly more unidentifiable than the non-tangy versions. Sure, the classic blue and yellow is present in the regular Minion sweets, but that evil Minion looks a bit strange, it's meant to be purple, right? Unless there's a new flavour of Minion coming up in the movie. But we shall see. As it stands, these tangy Minions have much the same flavours as the other variety. The ingredients have an extensive list of fruits included, so it's hard to pinpoint exactly what these taste like, but the regular Minions seem to have a citrus/blue raspberry-like flavour. It's not as obvious a flavour in the non-foam-backed ones, but the tangy coating sure does make for a nice sour experience. The foam-backed Minions are somehow more flavoursome, but a little too much. The citrus element is very noticeable, and coupled with the coating it makes for a very tart sweet. The red Minion sweet is probably the best, with a much darker, bolder flavour that seems to incorporate the blackcurrant and passion fruit listed in the ingredients, but unfortunately there weren't many in the pack.

The original Minions sweets were nice, but nothing too special. While the addition of tanginess is a nice twist, the flavours remain the same. They're not necessarily bad, but Haribo have proven there are a lot better sweets they can churn out, just look at Tangfastics, or any other one of their tangy bags.