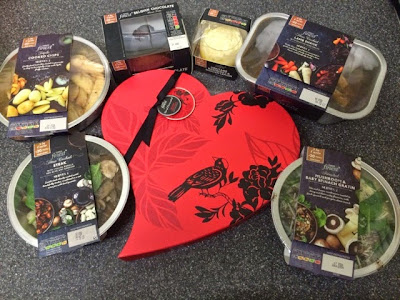 I was pleased to receive a voucher from Tesco a few days ago in order to purchase their Finest Valentine's meal deal. After all, the day is fast approaching, and while I don't buy into the overpriced, crowded meal out, it was nice to try out a cheaper alternative. Sure, some may like to cook from scratch for their loved ones on the special day, but if you're like us and have three kids to wrangle during the day, shoving some prepared food into the oven may be all you have the energy for.

The Finest Valentine's meal deal gives you two main dishes, two sides, two desserts, and either a bottle of wine or champagne, or a pretty impressive looking box of chocolates, which is obviously the one I chose. The total price is a very nice £20, which certainly won't leave you out of pocket compared to other dinner alternatives on the day. The deal itself only started yesterday, so I ran out and picked out a selection that interested me. But with seven separate products to review, and only two days until Valentine's Day, I'm going to do something a little different and condense my reviews into two posts. Today will be the savoury main course, while tomorrow I'll showcase the desserts. So without further ado, let's tuck in. 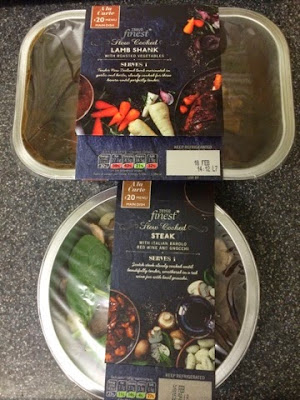 This was the dish that really caught my eye. It's a big meaty lamb shank, in a pool of onion gravy, and surrounded by vegetables. Well, I say surrounded, but vegetable support is a little thin on the ground. When the ingredients said "carrot" I didn't quite expect a singular carrot. Still, it was a nice carrot, and there were a few parsnips to tuck into as well. Quite soft, not the crispy kind that I'm used to whipping up, but certainly flavoursome. But I wasn't there for the vegetables, not when there was a big hunk of meat to tuck into. The lamb is fantastically tender, and very meaty indeed. It slid off the bone very easily, and there were no nasty bits I encountered while chewing. Just a simply tasty, meaty treat, packed full of flavour. The gravy adds even more, a lovely, subtle onion flavour that complements the meat beautifully. This dish is definitely a winner, and if lamb isn't your thing, there's also a gammon shank available that should be just as good.

I'm a sucker for steak, so I couldn't pass this one up. This dish contains pulled Scotch beef in a Barolo red wine sauce, with mushrooms, spinach and gnocchi. I must say, I wasn't a big fan of this. The gnocchi is very thick, and any sauce you gather on it doesn't really stay put, so often I was chewing quite a dry dumpling. As for the sauce itself, it's okay. Flavoursome, yes, and with plenty to go around, but it was a little too dark and full on for my liking. But hey, I'm not a big fan of wine, so maybe that's what put me off. The mushrooms and spinach, I have no complaints about. They're nice, and they do what they came to do, and that's to complement the meat. The steak is where this dish shines. It's soft, tender, and packed with flavour. I could barely taste any fat while eating, just nice big chunks of succulent meat. I would have given this dish more points based on the steak alone, but the gnocchi did put me off, especially when eating it with the steak. Having two distinct textures in one mouthful isn't the best experience, and I was always left chewing on the dumpling for longer than I'd have liked. If you're a fan of gnocchi, by all means give it a go. There are a few other beefy options available for those who are just here for the steak though. 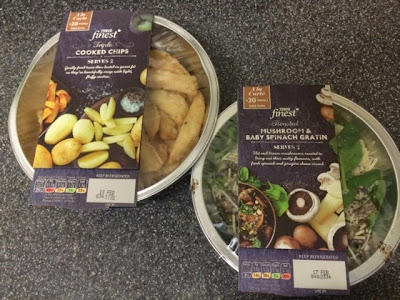 Now, I love mushrooms, but I'm thinking I perhaps went a little overboard while picking out this meal. The steak has mushrooms, and this gratin has even more. There's a nice bit of spinach thrown in there that adds a nice bit of flavour, but it's certainly drowned out by the sheet volume of mushrooms. Don't get me wrong, they're nice mushrooms, but there were just too many compared to the other elements. The Gruyere cheese topping is very good, but there's just not enough to cover everything, and more often than not I just got a mouthful of mushrooms. Great if you're crazy about mushrooms, but I would have liked a little more variety in the dish.

With all the fancy ingredients thrown into these things, it seems odd to go with just chips. But these aren't ordinary chips, they're triple cooked. They've been fried twice before you even open the packet, and basted in goose fat, so all that remains is for you to cook them the third time. This one requires a little more preparation than the others, you need to take them out halfway through to roll them around in the melted goose fat. But by jove it works. These chips come out fantastically crispy. The insides are beautifully soft and fluffy, while the outsides absorb the fat spectacularly, leaving very little greasiness, but a satisfying crunch. These chips are quite simply delicious, especially when dipped into the gravy that comes with the lamb shank. Definitely a side worth purchasing.

So there you have it. Two sides and two mains, two great, two alright. But hey, there are plenty more to choose from, and this definitely is a good deal for a pretty fancy looking Valentine's meal, so nip down to Tesco and check it out. I plan to have the review of the sweet stuff up early tomorrow, so watch this space. You really do need to go and buy those chips though.
Posted by A Review A Day at 15:17