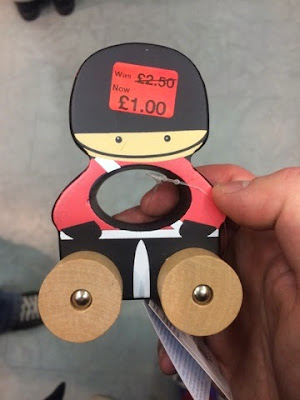 Some interesting things turn up in the bargain bins in Primark from time to time. This is one of those things. Well, I say interesting, but this one is more baffling to me. It's a wooden rendition of a Queen's Guard. With wheels. Also a hole in the middle.

Why the Queen's Guard? Were these surplus stock from the Jubilee three years ago? Okay, I get they could still be relevant, that uniform is iconically British. But then why the wheels? The Queen's Guard consists of people, with legs. I don't think I've ever seen one with wheels. Sure, it lets you push this little guy along, but you know what most kids like to push along? Cars. We already have many good objects with wheels, we don't need to go adding them to people willy nilly.

Okay, I suppose I can see some of the appeal. It's a little different, and it's nice and colourful enough. But I still can't quite wrap my head round it. Since finding the thing, I have been informed that the hole in the middle functions as a good grip for the playful toddler, but I'm not sure if I buy that. There's just too much that doesn't make sense. Why the theme? Why the hole? Is the curved line on the face the helmet strap, a beaming smile, or both? Whatever the case, I returned the toy to its box, and left Primark confused. I'm likely reading too much into a simple toy, but hey, that's what I'm here for. So if you're looking for a Queen's Guard that you can drive around and post things through, check out your local Primark. For the other 99.9% of the population, I'd suggest getting your toys elsewhere.