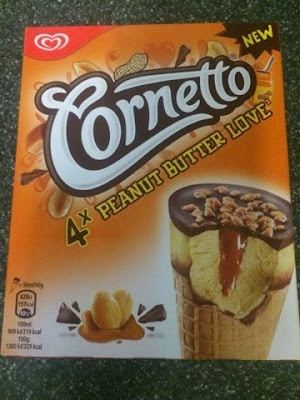 Peanut butter treats are certainly becoming more popular in the UK, and while there have been two fantastic peanut butter efforts from Ben & Jerry, and even an offering from Tesco, I was pleasantly surprised to see that there's now a peanut butter Cornetto on the shelves. They've been released alongside a Cookies & Dream flavour, and while that also looks nice, I couldn't pass up a peanut butter cone. 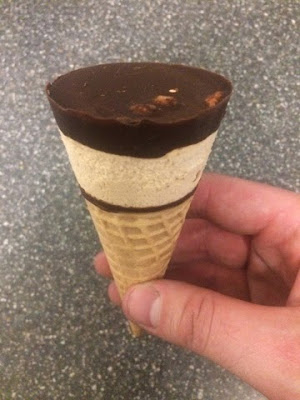 This Cornetto is comprised of a peanut butter ice cream, topped with a slab of chocolate indented with peanuts, and a hidden caramel core running through the middle. The chocolate on top does look quite strange, but it's a welcome addition. It provides a steady chocolate flavour, and a lovely crunch to complement the smooth ice cream underneath. The peanuts add a nice bit of texture too, and really help to bring out the flavour of the ice cream, not that it needs much help. It's a lovely, creamy ice cream that certainly has a nice peanut butter flavour. I was expecting it to be a little too sickly, but thankfully I was proven wrong. This isn't like the heavy filling of a Reese's Peanut Butter Cup, it's just a smooth, nutty experience that feel just right inside an ice cream cone.

The caramel in the middle, though, I'm not too sure about. It gives a good kick of sweetness, but it was just a bit too much for me, quite thick and sickly. Perhaps it's because I was hoping for a jelly core to complement the peanut butter like Ben & Jerry put into their Core offering, but something just didn't feel right about this pairing. Still, there's not a whole lot of caramel in there, and it certainly didn't taste bad, just a bit too sweet around the middle. This is still a very good offering from Wall's, a nice idea that executed very well, and I'll most likely be picking up some more of these in the future.