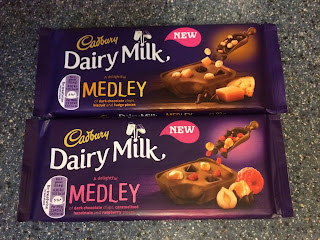 More new Dairy Milk bars. They seem to be coming out at a rate of knots these days, and while I'm all for different bars of Dairy Milk, I have started to latch onto the bandwagon of the declining taste of Cadbury chocolate. I can't say I've particularly noticed it in the last couple of years, but after eating a Cadbury Easter egg a few days ago I get what quite a few people are saying about how it's not quite the same. These Medley bars could be seen as another way to incorporate less actual chocolate into the recipe by throwing in a load of chunks of other stuff, but I do enjoy chocolate bars with lots of stuff crammed into them, so I was quite looking forward to these. Medley bars come in two varieties, one is loaded with dark chocolate chips, caramelised hazelnuts and raspberry, and the other contains dark chocolate chips, biscuit and fudge pieces. 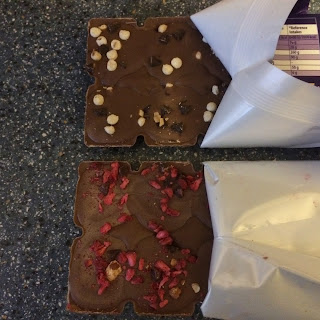 You know, from the cover I was expecting those pieces to be embedded in the top, creating a feast for the eyes. But upon opening the packaging, it seems they're just haphazardly strewn across the bottom of the bar, the actual top is completely bare. Not looking great on the presentation side, guys, but who cares about that as long as it tastes good? The chocolate itself tasted to me quite like classic old Dairy Milk. Perhaps a but less creamy, and slightly more cocoa solid-like, but it's still a pretty good chocolate. It's the pieces that are the main draw though, and they're not executed all that well. In the raspberry variety, that's all that's really noticeable. It's a very bold and sweet freeze dried raspberry taste, and while it's fruity, it's really not all that authentic, and it swamps everything else throughout the bar. I couldn't even taste the hazelnuts, let alone whether they were caramelised or not.

As for the biscuit and fudge pieces, I can't say I consciously came across a piece of fudge. I went looking for one, nibbling precariously through the pieces, but I only seemed to come across buried biscuit bits. There was a hint of something chewy, but it wasn't particularly flavoursome, and what taste there was was probably lost to the chocolate itself. Because of that, the bar is pretty bland, just a hint of biscuit that, while executed fairly well, just doesn't live up to what is promised on the wrapper.

I wanted to like these bars, but the balance in them just seems all wrong. Only one element of each one is really noticeable in the taste, and the chocolate seems to have suffered a little in terms of quality. They're not awful, they taste alright, but they don't even look presentable. Cadbury have a lot better to offer, but if you want to pick these up, I'd say do it quickly before they disappear, they're not really good enough to stick around.