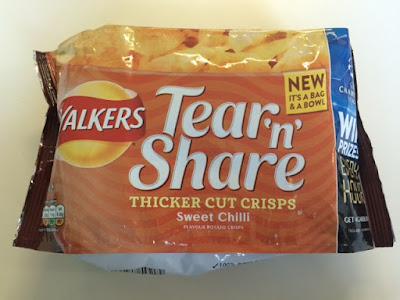 It's been a few weeks since I stated my disappointment at these new Tear 'N' Share bags, they provide the same amount of crisps as Extra Crunchy, but at a larger RRP, and attempt to distract us with the gimmick of the bag turning into a bowl. But there was one flavour of these that offered something new, a sweet chilli flavour that can't be bought as regular Walkers, and I was itching to try it out.

I love a bit of sweet chilli, and I know that Walkers know what they're doing with that, as their Thai sweet chilli Sensations are amazing, and I was hoping the greatness would transfer to these. Sadly, it was not quite the case. While these crisps possess the satisfying crunch from being extra thick, there isn't a whole lot of flavour packed in, which is strange, as the salt and vinegar ones were very bold tasting. There is a definite sweet chilli flavour there, nowhere near as spicy as the Sensations, but still a mild, lingering heat, and there's a nice sweet undertone that adds an almost saucy layer to the overall flavour. Unfortunately the full taste doesn't come through a whole lot, and some of the time these crisps are unite bland. It's a shame, there's some potential in there, but the execution is a bit off. If you're after some spice, I'd recommend sticking with the Sensations. These aren't bad, but they're not enough to save this Tear 'N' Share idea.