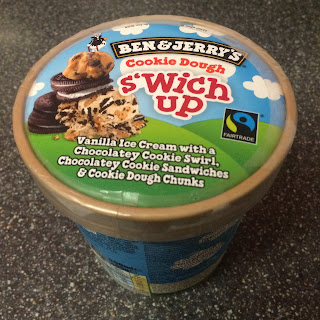 After the lovely array of flavours that popped up at the end of last year, I thought it would be a while before another one came along, but thankfully it's arrived already. This is Cookie Dough S'Wich Up, a flavour that's exclusive to Domino's at the moment. As soon as One Treat reviewed it the other day I've been looking for an excuse to order pizza. I don't particularly like paying full price for anything, but I think good old Ben & Jerry have earned my trust enough for me to justify splashing out £5.49 on this tub. This is, as you may have guessed, a variation on the classic Cookie Dough flavour. It's got the vanilla ice cream, it's got the cookie dough chunks. But it's also got a chocolate cookie swirl and chocolate cookie sandwiches embedded throughout.

The vanilla ice cream and cookie dough are as good as ever, a nice creamy base with some gritty, doughy chunks, it's what Ben & Jerrys have been doing best for years. But they contribute to just a fraction of the overall flavour, the real draw here is the chocolate cookie stuff. The swirl is omnipresent, a constant chocolate layer applied to the ice cream, with bits of crushed up chocolate biscuit spread throughout that provide an extra layer of gritty texture and a good flavour to boot. But the main event is the chocolate cookie sandwiches. From the name I was getting somewhat excited that they would be like the old Ben & Jerry's 'Wich that were discontinued some time ago, so I was quite disappointed to find they were just regular Oreo style biscuits. That's not to say they aren't bad, they're massive and still have that nice crunch to them, giving way to a creamy interior.

There's a lot going on in this tub, and it's all good stuff. Sure, the cookie dough element is somewhat lost underneath the amount of chocolate, but the chocolate parts aren't overwhelming. In fact, this tub doesn't scream chocolate, it's more about the cookie, and the different textures throughout the tub are what makes it great. It's not the most perfect Ben & Jerry's, but it's pretty damn good.