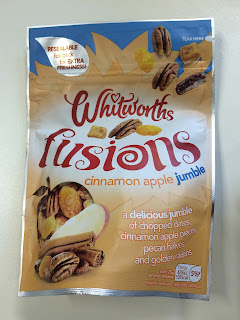 I've seen Whitworths lining the shelves before, but I've never really dabbled. Dried fruit isn't exactly my number one go to snack. But now they've come out with these Fusions, which incorporate nuts and fruits in one bag, like a trail mix. This one contains pecan halves, raisins, chopped dates and cinnamon apple pieces.

The raisins and pecans are your usual fare, they're pretty good, some nice juicy fruit and some flavoursome nuts that add a crunchy texture. As for the chopped dates, I didn't quite get on with them. I'm not much of a fan of dates anyway, they leave my mouth dry and aren't exactly what I'd call tasty, and the ones in this bag just look like inedible, unappetising lumps. Thankfully they're balanced out by the cinnamon apple pieces, which are really nice. They're quite small, but they're juicy, and there's a nice coating of cinnamon that works well with the taste of the apple itself. Overall though, this works out to a pretty average bag. Most of it's alright, and the apple pieces are great, but their size is a little disappointing, and the dates are not a good addition in my eyes. This bag is alright for a healthy snack, but I'm sure there are better out there.