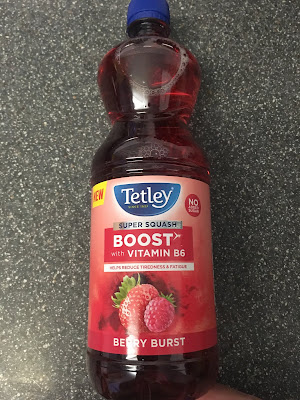 This "adult squash" trend that has popped up recently is somewhat baffling. I didn't know that squash was considered just for kids, but apparently there's a market for this stuff, I guess like those Harry Potter books with the "adult" covers. Here we have Tetley's effort at creating a "super squash"which not only contains fruit, but also vitamin B6, which can help reduce fatigue. So this is medicinal squash for adults? I wasn't convinced, but I had to try it just to see what it was like.

I think Tetley should stick to making tea, this is not good squash. There's some amount of berry flavouring in there, particularly strawberry, but the majority is apple, and it's not great The fruit is overall a bit weak and it has a bit of a funny after taste. Plus it's only single concentrate, so it's not even economical. Just get regular squash, the supermarket brands are better, and if you're that worried about fatigue, there are probably better ways to deal with it than drinking cordial.