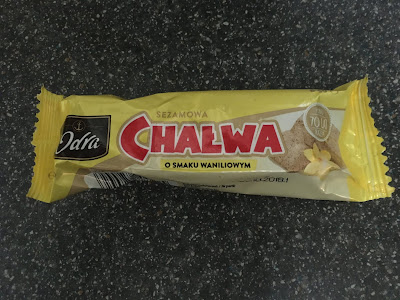 Here's an interesting little bar I picked up from the Polish section of Tesco. It's a bar of Chalwa, which I assumed was a confection based on the fact that it's vanilla flavour, but it's also sesame-based. It's also greasy on the outside of the packaging, so I was a bit suspicious from the start.

Turns out this is a version of Halwa, a Middle-Eastern delicacy that I can't quite get on board with. But while that's gelatinous and spices, this one is indeed sesame-based, and also sweet. It's odd, it's a greasy lump of stuff with a very gritty texture, a definite sesame flavour, and a sickly vanilla element chucked in too. I'm not a fan of the texture at all, and despite that fact that the overall flavour grew on me, I couldn't bring myself to finish the bar. It's just odd, and very greasy. I think this is an exotic snack food I'll never understand.