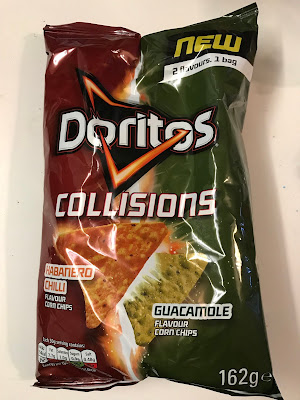 Doritos sure are loving their dual flavour packs recently. They started out with the Roulette, hiding a few hot chips in the midst of some cheesy ones, then moved onto chips that changed flavour as you ate them. Now you can grab Collisions, which are two differently flavoured chips in one bag, designed to complement each other. Seeing as I'm a spice fiend, I couldn't resist the call of the habanero, and this bag also features a guacamole flavoured chip, which intrigued me to no end. 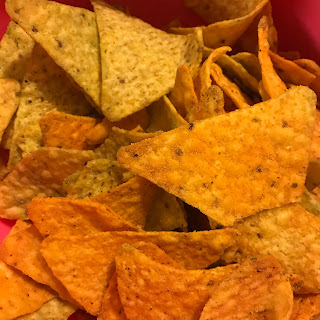 The lighting is not the best there, but you can just about make out that the chips come in both a green and reddish hue, so it's easy to identify which chip is which, and pair them up accordingly. There's a good number of both flavours throughout the bag, so you won't be left with one over the other. But how do they taste? Well, the habanero is something of a return to form, similar to the ones found in the original Roulette bag before they wimped out and replaced them with the inferior Tobasco chips. They taste like habanero, and have a decent level of spice that builds up quite effectively the more you eat. I was a little disappointed on first trying these chips, I was expecting more of an instant hit of spice, but looking back having demolished a few, my tongue is on fire to a satisfying degree.

The guacamole chips are very interesting. Definitely reminiscent of that classic dip, a smooth, cooling guacamole taste that complements the spice quite well. The flavouring doesn't quite last as long as I hoped, the chilli wins out fairly quickly, but it's a pretty novel flavour for a chip that's done pretty effectively. This is another good idea from Doritos, and I'll be hunting down the other variety as soon as I can.