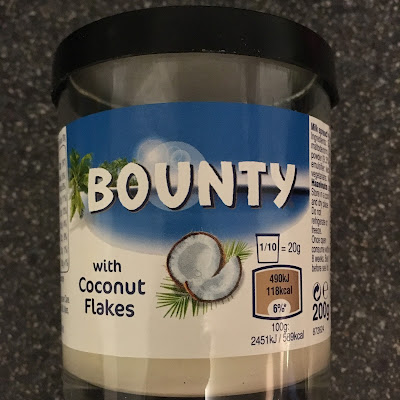 Happy new year! I would say "new year, new me" but apparently I'm starting this year doing what I've always done, eating a likely unhealthy amount of spread. I'm still working my way through the Tiptree chocolate set, but figured I'd squeeze this one in the middle. I was always put off buying Bounty spread due to my love of coconut not being quite fully formed. However, I found this in Poundworld, and the price tag was too good to pass up (it was £1). So here we have the Bounty spread, which seems to be devoid of chocolate, instead being a milk flavoured spread with coconut flakes.

I guess they wanted the focus to be coconut here, and my word they have succeeded. This is a pretty damn fantastic spread. The coconut presents as soon as it hits the tongue, the flakes are mixed in wonderfully, giving a great hit of flavour, and incorporated with the creamy milk spread, it makes for a smooth, very sweet topping for whatever you want to put it on top of. This is basically like spreading coconuts on things, except actually possible. So if you were ever wondering how to get coconut on your toast, wonder no more. I mean, I put it on pancakes, which was great, but I assume it would be good on toast too. It's just great.