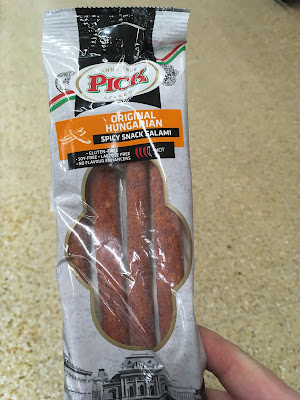 I grabbed this bag as a quick snack while I was rushing out of Sainsbury's, I know it's a snack because it says it right there on the packet. Anyway, this pack was a mere pound, and contained four Peperami size salami sticks. I figured they might be a better quality, and I'm still not entirely sure if they are. They have that dry, almost chalky looking finish on top, like those sausages hanging in a Polish deli. Biting into one reveals a pleasantly meaty interior, but as I chewed through it began to taste a little too processed. Still, there's a decent enough amount of meat in there, and the thing is filling. I'm somewhat hung up on the spicy part though. The packet gives these three chillies out of four, but the heat wasn't particularly intense, more like a mellow spice that lasted throughout, so I was quite disappointed. These aren't as nice as a Peperami, but they're a decent enough snack, and at the moment they're a decent enough price.