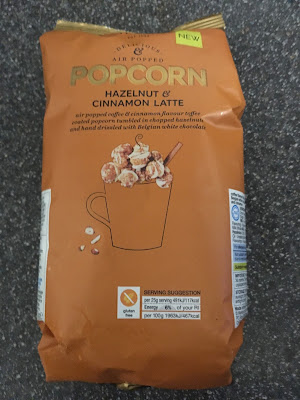 I thought the whole fancy popcorn phase was coming to an end, but popping into M&S at the weekend I saw they had a nice range of delectable flavours. This one was a mere pound, and promised me cinnamon and coffee in one bag, so I had to snatch it up. I'm thinking this range is new, but I can't say I frequent M&S, and this one was reduced to clear, but I figured I'd give it a go anyway.

This is some pretty decadent popcorn, there's a lot going on here. Let's start with the cinnamon and coffee, which are the flavours given to the popcorn, which is also toffee coated. The coffee is quite noticeable, a slight bitter taste underneath the sweetness, with a little hint of cinnamon spice as well. The toffee does tend to overwhelm it, but the flavours are there. This stuff is also covered with white chocolate, which lends a creaminess to that coffee taste and helps to round out the flavour, and it's also rolled in hazelnut pieces, which tops it all off with a sweet, nutty finish. With all the stuff going on in the outer layers, the flavour of the popcorn itself isn't as strong as it should be, but overall this is a very nice bag of popcorn. I'll have to try out the others soon in case they get reduced to clear.