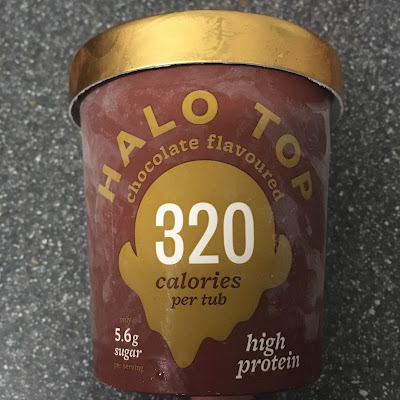 I've heard a lot of people raving about this ice cream, and if not talking about the taste of it, they're intrigued by the idea of it. Of course it's an interesting sounding tub, only 320 calories in the whole thing. I wasn't too convinced it would translate to a tasty ice cream, but I was holding out hope that I could one day consume an entire pint tub and not feel guilty. Okay, I'd probably still feel guilty.

I went for the chocolate flavour to start out with (of course I'm going to try the others), and I have to say it's not bad. The ingredients predominantly feature milk and eggs, but there's a fair amount of cocoa in there, and it does show in the flavour. It's not as creamy as other chocolate ice creams, and the texture itself seems a little off, but considering how few calories are in here I was expecting a lot worse. It tastes like chocolate, it's pretty satisfying, and while it ain't no Ben & Jerry's, it's a great way to have a frozen treat without worrying about your waist line. Rejoice people, diet ice cream is here.