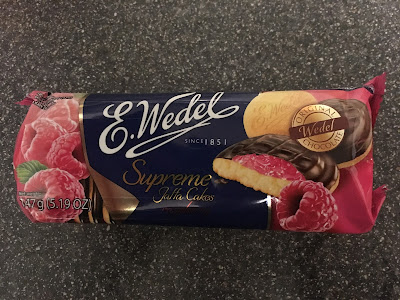 Off brand jaffa cakes rarely stack up to the McVitie's classics, but this pack drew my attention yesterday as it had a nice big raspberry on the front. Yes, these are raspberry jaffa cakes, and forgiving the fact that the "jaffa" part is meant to refer to oranges, I had to give them a try.

Well, these aren't as good as McVitie's, that's for sure. They're different though, and it's nice to see a different flavour sandwiched between cake disc and chocolate. The sponge part is fairly firm, a little dry, but there's enough flavour in the jelly part to make it less bland. As for the chocolate, it's quite dark, and has a good snap to it, but I feel milk chocolate would have blended with the other flavours quite well. So while these add in a nice, different fruity flavour, the rest of the cake doesn't quite stack up. Worth a try, but nothing special.