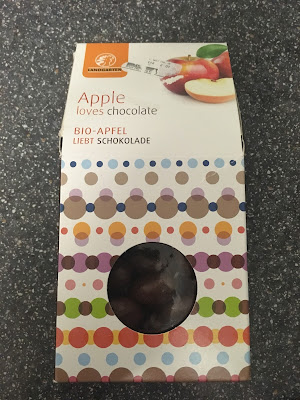 I went into Homesense for the first time today, and quickly found it was one of my new favourite places to go. It's got that TK Maxx not-quite-organised chaos vibe, the shelves just piled willy-nilly with random items. But part of that chaos was the reduced food section, where I found a few cheap little delectables to take home. This is "Apple Loves Chocolate", which is a pretty good name, but doesn't really tell you what's in it. Basically, these are freeze dried apple pieces, wrapped in chocolate, with a bit of cinnamon thrown in for good measure.

Let's start with the chocolate. It's pretty good, not quite gourmet stuff, but it's layered on pretty thick and has a nice creamy texture. I figured the apple inside would be pretty crunchy, but they still retain some chewiness and actually retain their flavour very nicely. Not the freshest way to experience an apple, but a nice fruity centre that works well with the chocolate. The little hint of cinnamon adds a little extra layer of sweetness and spice, and helps bring it all together. These are some great little chocolates, I don't think I've seen chocolate covered apple pieces before, so these are worth seeking out.