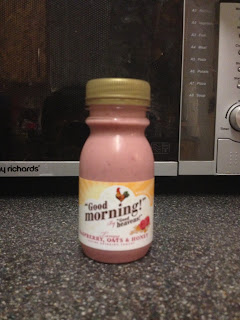 Yeah, that's a small bottle. But they are nowadays, these drinking yoghurts. It's because they put all these "friendly bacteria" inside that are apparently on standby to make your body feel amazing. This one is no different, touting itself as "bio-live" and "probiotic", with the main ingredient being "live low fat yogurt". I don't normally agree with eating things alive, especially if they're not supposed to be alive in the first place. But hey, that's a review for another time. I'm just here to tell you if this drink is tasty.

It certainly is, though quite tangy, as you would expect from raspberries. I can't say I can detect much of the honey, but there are certainly quite a few oats thrown into there, like someone threw their porridge into a batch and they decided to market it instead of starting again. But the oats do add a nice texture, and it certainly makes the tiny bottle quite filling. The yoghurt itself is creamy, good quality. So there's a lot to be had in this little bottle. Creaminess, a nice bold tangy flavour, and a smattering of fulfilling oats that add a nice texture to the experience. It's perhaps a little too sour for my tastes, but it's certainly very nice. Especially if it's flooding my body with bacteria that somehow make me a better person.