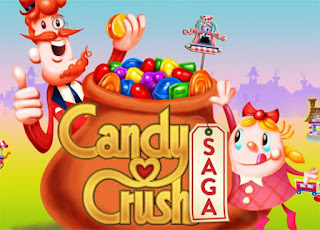 As a gamer, I have lamented the fall of modern gaming in the form of the "social" freemium games that now litter Facebook and the App Store. I have generally stayed away from such things. I've never farmed a ville, or declared war with the Mafia, although I did draw some things for a while. But yesterday I decided to give Candy Crush Saga a try, a game that I had heard about but not really researched effectively. This was my downfall.

Candy Crush Saga is, at its heart, a match 3 game. Get three of the same shape together, they disappear. Four or more, you get a neat little power up in its place, very Bejeweled like in essence (although the first tile swapping and matching game was Panel de Pon, yeah, now I'm doing my research). But there are several types of levels to keep the gameplay fresh. Some levels have pieces encased in "jelly" that you must clear to pass the level, others demand you reach a certain score within a time limit, and some ask you to coax special ingredients to the bottom of the screen by destroying pieces underneath them. Nothing too unique, but the themes swap around enough that you're not doing the same thing over and over.

Sorry, did I say you won't be doing the same thing over and over? Because you will. A lot. While Candy Crush Saga may start off quite easy while it shows you the ropes, it quite quickly becomes very much an unforgiving game of chance. I have played certain levels tens of times before I've managed to just barely pass. Not that I mind too much, it makes it challenging, and makes me determined to beat it. But my problem lies with the fact that this game is clearly designed to be stupidly difficult. While I casually mentioned "freemium" in the first paragraph, this game is just overly obnoxious about it. You see, what makes some of these levels so difficult is that you have to clear the items in a certain number of moves, which get increasingly smaller. If you run out of moves, guess what? You can get some more, but it will cost you 69p. If you don't want to pay for that though, you can forfeit one of your five lives instead (this will happen a lot). If you lose a life it takes 30 minutes to get it back, or you can pay for some more, with your real money. Five lives not enough? Guess what, you can increase your limit to eight, for a cool £11.99. Don't crack open your wallet too soon though, because you can earn power ups that will help you in the tougher levels. Well, you can earn the right to buy them, that is. About £1.50 a time will get you a few helping items that may not even help you anyway. But if you want to go for the special power up that lets you make one special tile per game forever, there's that option too. Only £27.99!

So yes, it's pretty ridiculous the amount of stuff that pops up during casual play to remind you how much better you could be doing if you pay the company a lot of money. I'm sure it works for some, but I am vehemently against the whole system. I have never paid for "freemium" content and I never intend to. I've downloaded a couple of iPhone games that have hindered me to a large extent for not parting with my cash, and they have been swiftly deleted. Thankfully Candy Crush Saga is somewhat bearable. If I run out of lives I can just do something else for a couple of hours, and then try again. The reason I want to try again is because it's a pretty addictive game.

It's very pretty too. The levels are laid out like a Candyland style board game, the candy pieces you need to blow up are bright and colourful, combos explode satisfyingly all over the screen, and some of the power ups are pretty cool too, especially when you can combine two special combo pieces to really wreak havoc on the board. So yes, these people know what they are doing, and have created a challenging, addictive game that looks good and plays well. But the whole freemium aspect has somewhat soured the experience for me. If they just released it at a flat rate like most iPhone games, I might be inclined to give it a bigger score. But at most this is a good game that has sold itself out for a quick buck from impatient social media gamers.