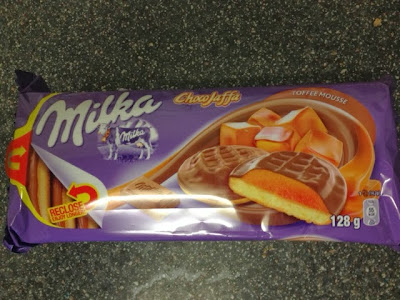 There sure are a lot of interesting Milka products that don't make it into the UK supermarkets. I've seen the Milka version of the standard Jaffa Cakes before, but didn't bite as I figured they wouldn't be much different. But today I found that there are more varieties, as Milka apparently aren't afraid to make jaffa cakes that are entirely lacking in jaffa. Instead of the regular orange filling, I had the choice of either chocolate or toffee mousse, and I went with the latter.

The chocolate on top is your standard Milka fare, it's very nice, and the sponge underneath is actually pretty good too. Perhaps a little dry compared to the one and only proper Jaffa Cake, but it holds its own. It's especially helped by the filling in the middle, which is a quite generous helping of some smooth toffee mousse. The flavour, however, is not so smooth. It's quite sweet and artificial, and doesn't really blend in too well with the subtler taste of the chocolate and sponge. It's quite nice once you get used to the flavour, but these cakes are certainly not a patch on the proper orange kind.