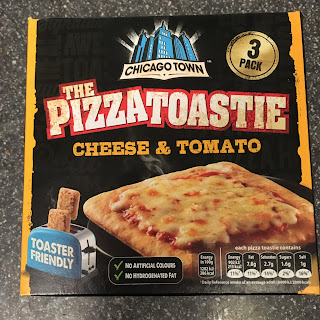 We can put pizza in the oven, and the microwave, so why not the toaster? The answer to that is that, of course, putting pizza in a toaster would result in melted cheese all up in your toaster. Well, Chicago Town have apparently performed an impossible feat, and have brought out a personal pizza that's "toaster friendly". So if you want to cook pizza in your toaster, here's your chance. 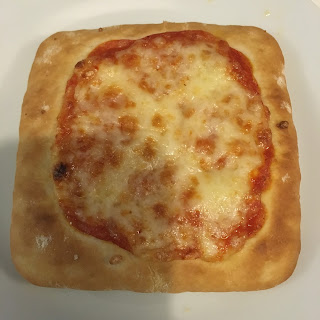 It took a few tries to cook it to a hot, melty, satisfactory condition, but in the end it turned out okay. I certainly wasn't going to adjust my toaster settings too far. But, here's the finished product in all its glory. It's easy to see why this is toaster friendly, there's a whole lot of crust and a small amount of topping, so dripping cheese doesn't become an issue in the cooking time frame. The result here is a fairly thick crust, but there's a fairly sizeable divot that's filled with the tomato sauce and cheese, so the balance isn't too bad overall. The crust is crunchy, and a little stodgy, but it's not the worst dough I've come across. The cheese and tomato is good stuff, it's just a shame there's not more of it. I understand the logistics behind not having it covered in cheese, but I think I'll be sticking with more conventional pizza cooking methods. This is a neat attempt at something new, but it's not a pizza revolution.