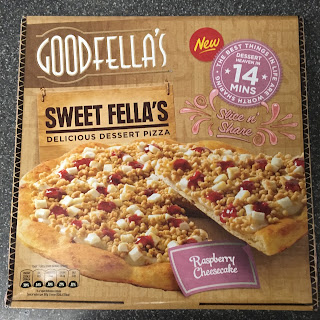 The Goodfella's dessert pizza range has expanded. After a lacklustre opening effort, and an improved apple crumble offering, this raspberry cheesecake has been on the shelves for a little while now, but has only just gone down to a reasonable enough price for me to bite. Currently £1.50 in Tesco, this is the raspberry cheesecake pizza. It's a dough base, topped with cream cheese sauce, digestive biscuit crumble, white chocolate pieces and a raspberry drizzle. What more could you want from a cheesecake?

A marriage of cheesecake and pizza sounds like heaven, right? But whereas this sounds perfect on paper, it's not to perfectly balanced in reality. A lot of this pizza is pretty good, the crumble is plentiful, the chocolate and raspberry provide bold flavours. But the cream cheese sauce isn't all that noticeable. There's a certain undertone of something in there, but it's lost to the taste of the toppings, and the dough underneath. The base is fairly nice, but it's not exactly flavoursome, so it does lend a certain thickness to the pizza without offering much in the way of taste. All in all, it's a sweet pizza that has some good stuff piled on top, it just doesn't taste all that much like cheesecake. A decent effort, but it could be better.