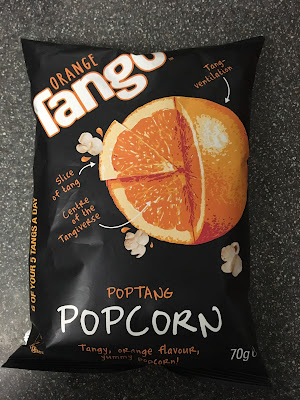 Not content with flooding the sweet market, Tango have decided to expand to popcorn as well. I heard about Tango popcorn a while back now, but only finally managed to pick up a couple of bags the other day in B&M. This popcorn comes in this orange variety, as well as apple. Both pretty distinct flavours for popcorn actually, so I was intrigued from the start. Let's start with the orange one, because that's the one I just ate.

Orange isn't normally a flavour I'd associate with popcorn, but it turns out it's actually a good pairing. Don't get me wrong, I'm not saying this stuff has an authentic, natural orange flavour, it's pretty much the taste of orange Tango smothered on popcorn, down to a slight fizzy tang. It's perhaps a little too sweet at times, but at least it's not bland. The popcorn itself great, the flavouring on top gives it a satisfying crunch, and the insides are nice and soft. On paper it sounds odd, in reality it's a good combination. This is a great, tangy, orange popcorn, I'll definitely be picking it up again when I next see it.