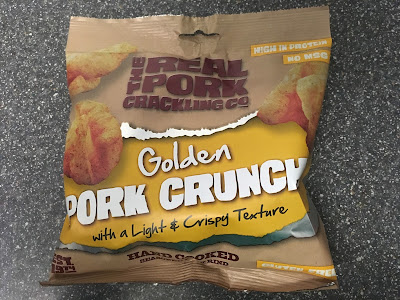 I recently received some samples of Pork Crunch, a pork scratching snack that promises half the fat of others on the market. I consider it a mission of mine to try and get into as many foodstuffs as possible, so I've dabbled in pork scratchings before. I've always found them pretty difficult to eat though, I'm always worried I'll end up breaking my teeth. That's where these ones stood out for me, they promised to be more like "pork puffs" than scratchings, and you know, they are.

There are a few varieties of these, but I started with the "golden", which seemed to be the most original scratching experience. They're light and fluffy, pretty much in between the texture of a scratching and a Quaver. The taste of a pork scratching is somewhat acquired I'm sure, but these are pretty nice. That definite pork, fatty flavour, but it's not overwhelming, and coupled with the puffy texture it's pretty good. They're a whole lot less greasy than regular scratchings as well, so you don't have to worry about the state of your fingers. 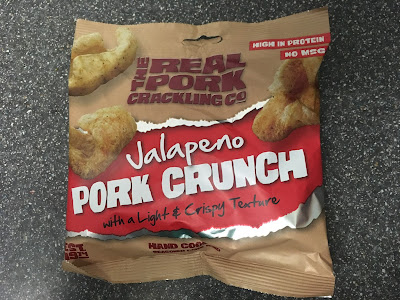 Now we're talking, a bit of jalapeno makes everything better. This adds a certain spiciness to the mix, it's not a particularly strong flavour, but it's a nice addition layered on top. It doesn't reach my list of all time favourite snacks, but it's a lot better than any other pork crackling I've tried. 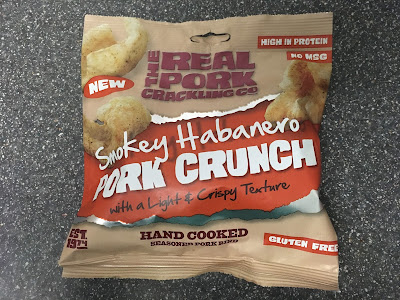 Now we're talking, this flavour is fantastic. The habanero spice is bold, perhaps a little too spicy for some, but the smokiness there takes the edge off. I could eat a whole lot more of these, the pork taste still comes through, and the level of heat is just right for me.

So there we have it, a selection of puffy pork scratchings that won't break your teeth, and on the whole taste pretty good. On top of the nice flavours, these are also have pretty nice nutritional values. If you're a low carb kind of person, these possess a perfect combination of protein and fat, with very few carbs, so they're a great snack for your Atkins or similar diets. Also, they're gluten free, which is a bonus. Obviously vegetarians need not apply. Pork crunch is available from supermarkets such as Asda and Sainsbury's, for 99p a bag. Well worth a try, even if you've been put off pork scratchings before.