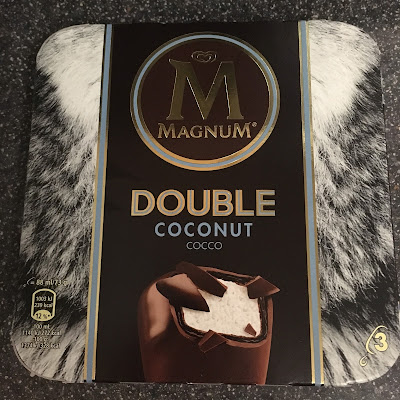 I reviewed the new Magnum Double Raspberry a few weeks back, and found it very much to my liking. I mentioned then that I'd probably wait for a deal on the Double Coconut before I picked them up, and today was the day. They're currently £2 in Tesco, so now's the time to dive in. This coconut version consists of a coconut ice cream, covered in two layers of chocolate with chocolate sauce in between.

Yes, the stuff in the shell isn't coconut flavoured, but I figured that was okay, as it's concentrated in the ice cream instead. As a matter of fact, it seems that's the way it should be, as these Magnums are good. The coconut is prominent throughout the ice cream, not an overwhelming flavour, but definitely bold and sweet. It's paired very nicely with the chocolate, which provide a satisfying crunch and creaminess. The double shell and sauce does get a bit much at times, taking over from the coconut a little, but the ice cream mostly holds its own, and all round this is a very nice effort. I was a little apprehensive about trying these, but they're on par with the raspberry variety. Well worth picking up, especially for £2.