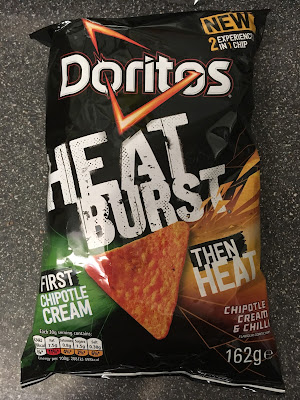 It seems the flavour changing craze has gone from sweets to crisps, now there's a couple of new Doritos bags that have "2 experiences in 1 chip". A chip revolution indeed. Basically, these Doritos start off as one flavour, before providing a "Heat Burst" in the form of an emerging chilli. There are two varieties available, this chipotle cream and a BBQ. I went for the former, as it's sounds like an interesting new flavour.

The chipotle cream is interesting, kind of like a smoked sour cream, it's pretty nice, sort of sweet. It doesn't take long for the chilli to kick in, and that's a satisfying heat that sticks around for a while. It's not exactly the same as the chilli heatwave spice, but it's the same sort of level. Both flavour are pretty great actually, and the changeover happens very effectively. But there is a problem with the very idea of these. Sure, the first chip has that nice chipotle cream taste, but after the chilli kicks in, it sort of overpowers everything, and after eating a few the chilli is the only noticeable thing. Sitting back a bit between chips, or having a drink in between brings back that creamy taste, but I'm one of those devour the entire bag kind of guys. Still, it's a couple of good flavours, and even if you can only mostly taste the chilli this is still a good bag of chips. If they got the balance on the flavour changing right, I'm sure these could be perfect, but the chilli is just a bit too much. A neat idea though, and worth checking out. I'll pick up the BBQ flavour when I get the chance.