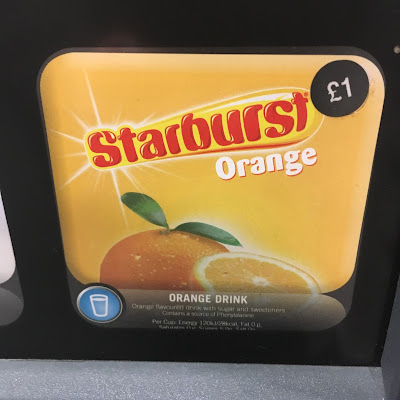 I was walking past a hot drink vending machine earlier, and nestled among the instant cappucino and hot chocolate was this brightly coloured button. A Starburst orange drink? I'd never heard of such a thing. I had no idea what to expect, apart from it being an orange flavoured drink. Was it hot or cold? Does it taste just like Starburst, or something else? There was only one way to find out, so I popped a pound in.

Turns out this is a cold orange squash drink, and a small cup of orange squash at that. Definitely not worth £1. It's not a bad orange drink, but it's definitely not the most natural. The closest thing I could compare it to would be the flavour of an orange Calippo, but not quite as sugary as that, because that would probably be revolting. I don't really know what else to say, spending that much on it has left me with buyer's remorse, but I can't blame the drink for my reckless spending. Still, it's a pretty average orange drink, so I would recommend going for one of the hot ones instead.