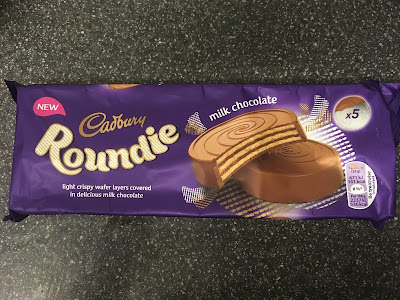 Here we go, Cadbury are at it again. If they're not bringing out a new chocolate bar, they're likely dipping their fingers in some other pie, and it looks like they're having a crack at the biscuit market again. I don't blame them really, their line of biscuits based on chocolate bars is quite divine, but it looks like they're trying something a little different with these Roundies. They are so called because they are round, I imagine, much like their other biscuits... But anyway, these are a triple layered wafer biscuit, with chocolate in between, and wrapped up in more chocolate. Because we all need more chocolate. They each come wrapped in their own little foil container as well, so maybe these are meant to be somewhat fancy?

These biscuits are fairly substantial, which I suppose is why they're individually wrapped, to encourage single portions. They're pretty filling as well, which is good. The chocolate coating is pretty thick and gives something of a nice snap, giving way to several layers of crunchy wafer. The wafer is somewhat dry and brittle, I ended up with a few crumbs, so I guess it could have been better. Thankfully, the chocolate in between wafers is enough to add a bit of moisture and make these turn out pretty alright in the end. These are nice thick chocolate biscuits. It's a shame the wafer isn't a bit better, but these are worth tracking down, because knowing Cadbury's track record with their new ranges, these won't be around for a long time.