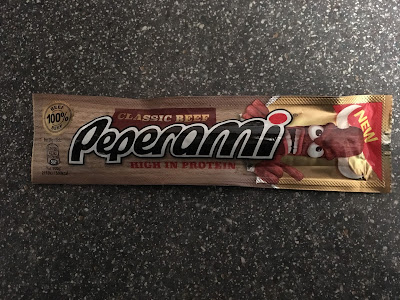 It's another new Peperami product, hot on the heels of the weird Peperami sausage roll, and the pretty awesome Peperami peanuts. Unfortunately, this one belongs on the former end of the spectrum. Here we have a "classic beef" Peperami, the term "classic" being a bit strange, since the packaging also says it's new, and there hasn't been a beef stick before for it to be deemed classic. Apparently the term is actually in contrast with another variety in the form of peppered beef, so maybe I missed a trick here. This is basically a stick of very lightly spiced beef jerky. It's not particularly flavoursome, but it's definitely meaty. I was expecting something of a kick from it, but it was pretty underwhelming. I guess it would be a good alternative for those who want a Peperami but really can't handle the heat, but I don't think I'll be picking this one up again. It has made me curious to try out the peppered version though, hopefully that would be a bit better. But I don't see this classic beef becoming a classic.