I mentioned a few days ago that I'm on a low carb diet, and while I've posted a few snack reviews since then, they're just ones from the archives, and there won't be many carby, sugary food stuffs on my plate for a while. So far it's been going well though, so I expect I'll be re-introducing carbs not too far down the line. But today for my dinner I picked this up: 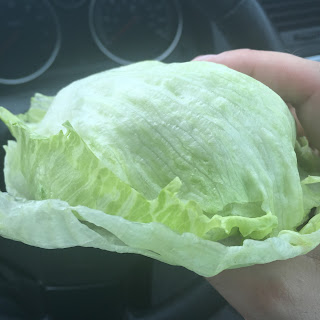 You may think things are dire if I'm eating a chunk of lettuce in my car. But a few bites reveals the good stuff. 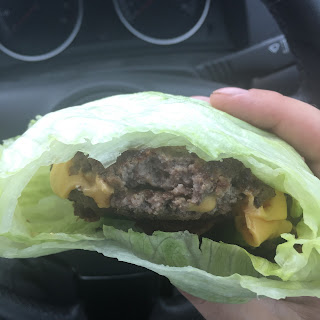 Yeah man, there's a burger in there. You see, I was near a Five Guys, and having been there before I know they do good burgers. What I also remember is that they offer any burger bun-less, which is right up my street at the moment. So in I strolled and ordered a bacon cheeseburger, with some toppings thrown in for good measure. They're all free you know, but I went with the mushrooms and jalapenos for their nutritional balance. Then they asked if I wanted lettuce instead of a bun. That's a pretty neat way of solving the bun problem. Lettuce is probably the least dangerous food going, so it'll be good for dieters, celiacs and anyone else who has problems with buns.

The result was a pretty novel and handy way of getting a burger in my mouth. They used a substantial couple of leaves that covered everything nicely, and I managed to get through the whole thing with hardly any spillage of juices or grease. The burgers are as fantastic as always, so it's nice to see Five Guys offer this alternative to those who can't do bread. They even asked me a couple of times to make sure I wasn't going bun-less due to allergens, so their attention to detail is pretty great. If I could eat all my burgers like this while I'm dieting, I'd be pretty happy.