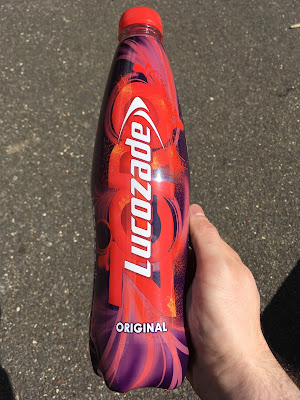 It's been a while now since Lucozade did the seemingly impossible and brought out a sugar free version of their glucose drink, and I must say I enjoy a Zero in orange or pink lemonade form when I'm trying to watch my calorie intake. Now there's another flavour on the scene, in the form of this Original Lucozade Zero. Now, original is definitely my least favourite of any Lucozade flavour ever, so I'll have to admit I went into this with some bias. But I'm not sure how they could pull off a glucose tasting glucose drink without the glucose.

The answer is they can't. The bottle says it's a citrus flavour, but it's not like any fruit I've ever tasted. There's a slight hint of that taste I hate in the full calorie version, but it's not particularly strong, so it's like sparkling water with a bit of a funny taste to it. As I said, I pretty much went in with an opinion already formed, but I always try to keep an open mind, and even so I can't get on with this. This might be good for someone who can't get enough of that original flavour, but I don't think they replicate it well at all, I'd suggest sticking with the other varieties, they're much tastier.