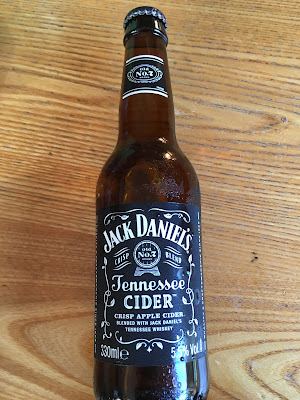 Do you like Jack Daniel's, but find the weather a bit too hot lately to be downing shots, or worrying about mixing it with Coke? What if there was some way to enjoy that Jack taste, in a refreshing, cooling, ready made way? Well, check this out, it's Jack Daniel's cider! A combination of apple cider and Jack Daniel's. Yeah, that's pretty much it.

Not, don't knock it 'til you've tried it, I've heard a few people complain that this is a very unnecessary product, after all, why not just drink the old fashioned Jack? Well, I'm quite fond of this. This is actually a pretty refreshing bottle, and the Jack Daniel's taste is very authentic indeed. It's not too strong, which is what you'd expect from a cider, and hey. sometimes I'm not quite in the mood for hard liquor. As for the cider side, that's what gives this bottle its refreshing edge. I can't say the apple was too noticeable, the flavour of the Jack does tend to dominate it a little, but there are some crisp notes in there that add to the refreshment. I'd say this is a pretty good combination, a fairly mild, more manageable drink that will be good for cooling off in the summer sun.