I made my Twitter and Facebook pages many years ago now, and my profile picture has remained unchanged since. At that time I tended to review an assortment of things, before I fully settled into my little nook of snack food reviews. So on that one afternoon I decided to expand my social media empire (not quite an empire), I cobbled together the most random objects I could find, piled them up on my cooker and took a picture. Not the most effective, nor really representative of what I was doing, but apparently I've been so busy for so many years that I haven't bothered to update it. I think I will soon, but first, let's actually review some more of the things that are in the picture. 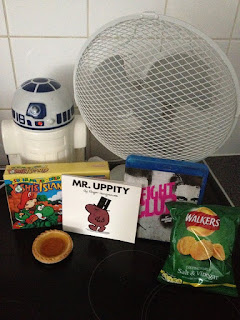 Man, what was I thinking? Why has this been adorning my profiles for so long? Why is there a singular jam tart in the corner? Let's focus on the latter one, apparently I just grabbed whatever cake was left in the kitchen, and so this apricot jam tart has been immortalised on the internet. But does it deserve to be?

I love a jam tart, I'm sure many people do, they're a classic cake that combines nice crumbly pastry with sweet gooey jam. That's it, no frills, just fruity goodness encased in pastry goodness. I couldn't tell you which specific brand that jam tart there is, and of course Mr. Kipling will beat a Tesco Value, but due to their simplicity jam tarts don't differ dramatically in flavour.

I like the fact that apricots are used in jam tarts. It's not a fruit you see represented much in sweets and the like, and it's a pretty decent flavour in jam form. I mean, it's not as good as the strawberry and blackcurrant you normally get in a packet of jam tarts, and depending on the brand they can be a bit hit or miss, but the apricot has held its own as a classic variety, and jam tarts just wouldn't be the same without it. I love you, apricot jam tart.