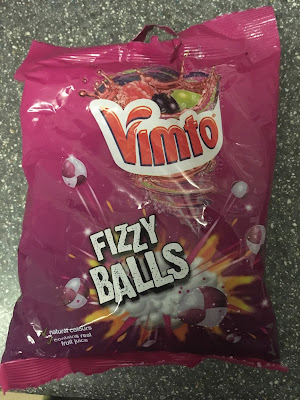 The Vimto sweet train just keeps on rolling. Here we have some Fizzy Balls, I figured they'd be an extension of the bon bons, which are fantastic, but it seems they're a different thing entirely. Not that that's objectively a bad thing, so let's see what's in here. These are basically Vimto flavoured boiled sweets with a fizzy centre, and also a fizzy exterior. Fizzy indeed, so how are they?

The first experience I got was a frothiness upon popping one in my mouth. It's a bit odd, and I was taken aback, but as I went on it grew on me, it's an instant frothy fizz that's pretty tart and somewhat satisfying. Unfortunately it soon fades, and what's left is a regular boiled sweet. It tastes like Vimto, so it's not awful, but it could be a bit more interesting. Once the majority of the sweet has given way, you're treated to a bit more fizziness in the middle, but it's not quite the same. A nice thing to end on, but pretty lacklustre compared to the outer layer. These aren't that great to be fair, there are better Vimto sweets out there, but they're worth trying out.