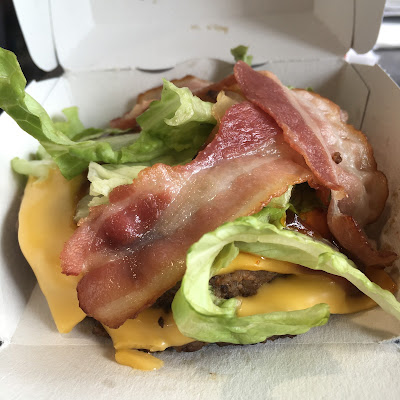 Not the most presentable picture of a burger, but hey, that's what happens when you go bun-less. At least they stacked it up and put it in the appropriate box, instead of flat in one of those breakfast trays. Anyway, here we have the last Great Tastes burger for the year, in the form of the Tennessee Stack. This one seems less ambitious than some of the previous offerings, but sometimes it's nice to have a simpler burger. This one consists of two beef patties, smoked cheese, bacon, lettuce, grilled onions and a Tennessee BBQ sauce.

No bun for me, I know, but it's supposed to come with a simple flour topped one, so I don't think that would add much to the overall flavour. What we do have here is... nice, I'll give it that, The sauce has a lovely sweet, smoky flavour, which is accentuated a little by the cheese, although the cheese isn't particularly flavoursome. The rest of it is pretty run of the mill, no surprises. It's a decent burger, but it doesn't do anything particularly great. Compared to what else has come out over the last couple of months, this is pretty middle of the road. Not bad, but I know they could do better.