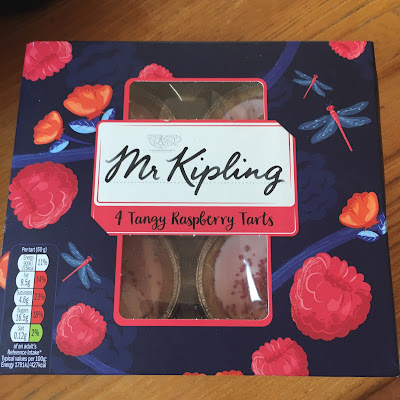 Picnicers rejoice, the summer cakes are being rolled out. Of course, Mr. Kipling already has a wide selection of cakes that will sweeten up those hot afternoons, but they don't want to stop there, as evidenced by the release of these new tarts. I went for the "tangy raspberry", because raspberries are great. These consist of a pastry case with raspberry flavour white chocolate ganache, raspberry jam, and topped off with raspberry sugar granules. That's a lot of raspberry, and a lot of sugar. 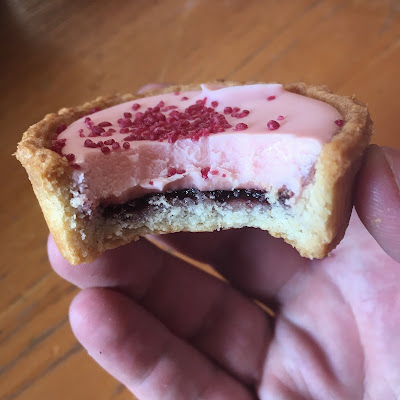 As you can see from this cross-section, apart from my dental records, is that this is truly raspberry through and through. Basically, it's like a Cherry Bakewell, but instead of the sponge there's just more icing. The ganache is a bit of an odd thing. It's good, but the sheer amount of it does get sickly fairly quickly. I wouldn't have said it was ganache if I hadn't read it either, it's got more of the texture of icing. There are hints of both raspberry and white chocolate, so that's pretty good, but it does tarnish the rest of the tart a little. The jam is great, it's where the tanginess lies, and is the most authentic raspberry element here. The sugar granules are a nice touch, adding a bit of crunch and yet more raspberry flavour, and it's all wrapped up in a nice soft pastry case. A pretty good effort at a nice summery cake, if they'd have gone easier on the ganache I'd say it was perfect, but all that icing does lay a little heavy on my stomach.