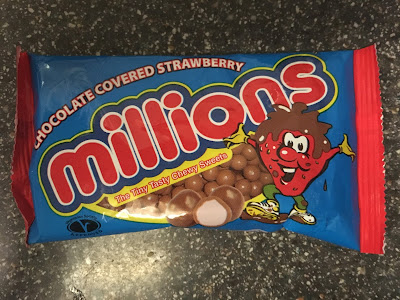 What is it with people trying to put chocolate and sweets together? They're separate entities in my eyes, but several attempts have been made. The Cadbury and Maynards mashup bag was just odd, and Millions have tried this before with the Millions Chocolate Bar. Seems like they were intent on breaking into that sweet/chocolate market though, as now you can get your strawberry Millions coated in chocolate.

There's not much to say about these, they're your regular Millions, but coated in chocolate. To be fair, the chocolate isn't bad. Obviously not of gourmet standard, but it's good enough. What I have issue with is that it's covering some particularly chewy sweets. Now, these are standard Millions, so they're great, but The chocolate is gone too quickly, and leaves behind a faint taste that just sort of interferes with the chewy stuff, taking the edge off that great strawberry flavour. No one element of this is bad, I just can't get on board with the combination. Take your chocolate elsewhere.