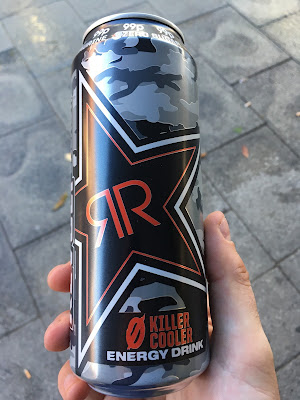 I do like a zero calorie energy drink, so it's always nice to find one I haven't tried before, even if it is by Rockstar. Their flavours have been a bit hit and miss for me, but I was hoping something in their "zero" range wouldn't possess the sickly flavours that some of their others do.

So here's the Killer Cooler, an unspecified flavour of energy drink that's pretty easy on the nutritional stats. I have to say, this wasn't bad. I mean, it wasn't great, but it wasn't bad either. It's pretty refreshing, not syrupy or sickly like I've found some of the more sugary varieties. As for the flavour, I couldn't quite put my finger on it. Slightly fruity, a bit of citrus maybe? It's not clear, it just tastes more like that standard energy drink flavour, which isn't a bad thing, but it is a little dull. Still, it did the job, refreshing enough and with a bit of a kick to it. I won't buy it over a Monster or Relentless, but it's nice to know there are backup options out there.