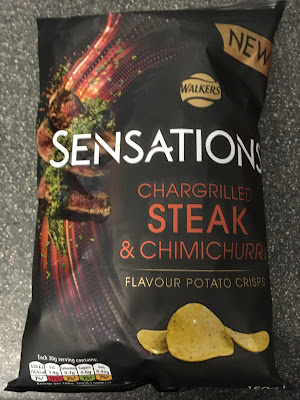 I do like it when crisp flavour come along more than one at a time. While I wasn't too keen on the idea of the wasabi Sensations (or a massive fan of the taste, not bad though), I liked the sound of these steak and chimichurri crisps, promising a meaty and herby combination.

I was thinking the steak would be at the forefront of the flavour, but it turns out the herbs are pretty strong, actually quashing the meaty tones a fair bit. Now, I'm not too mad, the steak isn't particularly authentic, and the herbs actually seem pretty accurately portrayed, but the balance is too off to rate these particularly highly. It's a lot of herbs with a slight steak undertone, not a bad combination, but a pretty average execution.