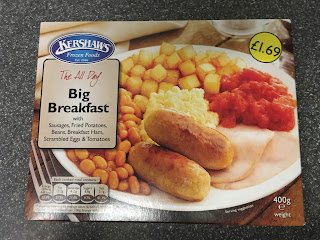 I found myself wandering around the corner shop earlier, pondering what to eat for this week's meal for one. Stumbling upon the chest freezer answered the question instantly, as I was greeted with this frozen dinner, or should I say breakfast? Yes, for £1.69 you can enjoy a cooked breakfast at any time of day, from a box! It's a selection of tomatoes, baked beans, fried diced potatoes, sausages and "breakfast ham", whatever that is. I had very little faith in this from the start, I figured I'd just eat it so I could write about it after, I wasn't expecting anything delicious, or even nutritious. I even doubted I could get it to look anything like the picture. But after choosing the most disgusting cooking option (nine minutes in the microwave), I wound up with this: 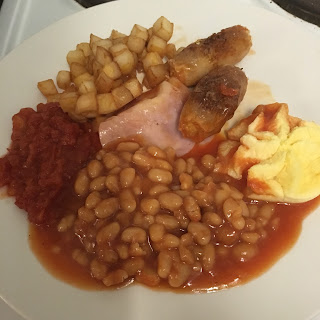 It's no perfectly posed, photo shopped masterpiece, but it doesn't look entirely inedible. I probably could have gone at that strange star-like lump of egg with a fork to make it a bit more scrambled, but I wasn't bothered too much, I just wanted to see how it tastes. I started with the tomato and beans, and to be fair, they're actually pretty good, almost on par with the stuff you'd get served up in a greasy spoon. Don't get your hopes up too much though, it's all downhill from here. The eggs are a bit powdery, egg-like I suppose, but not great. The meat is the real let down here, which I guess I should have seen coming. The "breakfast ham" is just sliced processed goodness, opting for more of a general meat flavour than any specific animal, let's just assume it was bred in a lab. The sausages are of a slightly higher quality, but they're still very soft and squidgy, these are probably made out of the stuff that's not even good enough for other sausages.

So yeah, this wasn't the best experience, but it's not as bad as I thought it would be. The non-meat parts weren't entirely awful, perhaps there's a market for a frozen veggie breakfast. But if you're looking for a delicious, protein packed all day breakfast, you should probably avoid the corner shop freezer. But you knew that already, didn't you?