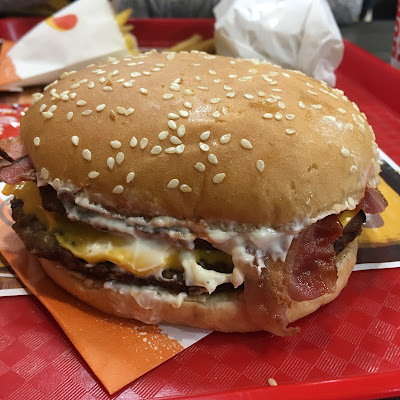 There's no Burger King in my home town anymore, so whenever I visit anywhere else with a Burger King, I just have to pay a visit. Normally I'm caught between having my all time favourite Bacon Double XL, or the special burger of the moment. Thankfully this time I didn't have to choose, as the main feature is a variation on that classic. This is the Bacon King, which is essentially a Bacon Double XL but with eight slices of bacon. Didn't take much more than that to persuade me. Also, it's loaded up with ketchup and mayonnaise, which seemed an odd combination, but I was all game.

Seeing as the Bacon Double XL is one of my all time favourite burgers, this would have had to do something very wrong for me to give it anything less than a perfect score. But as you know, bacon makes everything better, and increasing the count to eight slices just increases that meaty goodness. The original Bacon Double doesn't come with sauce, but I always load it up with ketchup, so that wasn't a big surprise. I was wondering how the mayo would fare, but it turns out it's all good, the combination of sauce and meaty goodness, alongside that gooey American cheese, makes for one amazing burger. It might set you back a few quid, but with the Bacon King, you're in for a treat. Even when this is off the menu, I might go in and add on more bacon so I can have it my way.