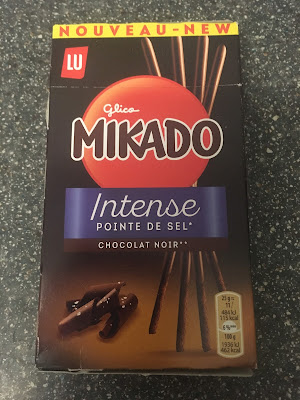 I've never really gotten into Mikado, mostly because of some snobbish belief that they're a cheap copy of the Japanese Pocky, but also because they come in quite generic flavours. It looks like they're getting fancy now though, just look at that packaging! It's all French, they didn't even bother localising the text, I assume because it makes it look more high market. So yes, these are some "intense" Mikado, with "pointe de sel" translating to "pinch of salt". So basically, these are pretzel sticks covered with dark chocolate with some salt thrown in for good measure.

I'm all for a bit of salt in chocolate, it helps to kick up the flavour a notch, and it does taste fancier. I think these guys took "pinch of salt" a bit literally though, there's some in here, but it's nothing substantial. That being said, it's hard to get a measure of how good the chocolate is, because it's a relatively thin coating on an otherwise fairly bland pretzel stick. What's there is good, but it's not enough to satisfy my taste buds, especially when they're expecting some sort of finesse. Fancy by name, mediocre by nature.