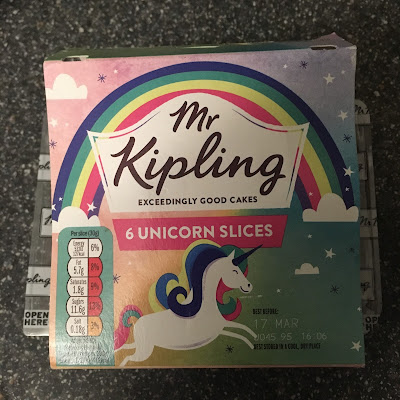 Yeah, I bought unicorn slices, big whoop, wanna fight about it? I picked these up not only because they looked interesting, but because my daughter is really into unicorns right now. That's only a good thing, because you can get anything in a unicorn theme at the moment, and these slices are just the icing on the cake... on the cake? Anyway, these cake slices aren't so much unicorn-like as rainbow-coloured, but since rainbows and unicorns seem to go hand in hand I guess it all makes sense somehow.

There's really not much to say about these, they're pretty much just a shameless cash in on the unicorn craze. Essentially they're angel slices, but with different colours. They're not even that rainbow-themed, just a mix of pink, purple and yellow. Clearly they know what they're doing with the branding, because my daughter ate these up, quite literally. But I see through your sham, Mr. Kipling. You could have at least have added something in marshmallow or candy floss flavoured. I guess they could have as much to do with unicorns as anything else. But no, just repackaged angel slices, and they're slightly smaller too! What a cheek. Maybe pick up a box for the unicorn enthusiast in your life, but I don't think they're worth it.